A measure to prevent further seawater intrusion can be to recharge surplus freshwater into the coastal aquifer. This can build up a barrier against further seawater intrusion and repulse the seawater back. Many case studies have been conducted to assess the influence of MAR on saltwater intrusion. A focus has been on the impact of MAR on the extent of seawater intrusion, the recovery efficiency and the planning of new MAR facilities or the optimization of existing ones. Pauw et al., 2015 examined the impact of artificial recharge and drainage system on a freshwater lense in a reclaimed tidal flat plain in the Netherlands using the density-driven numerical flow and transport model SEAWAT. They concluded that the freshwater lense increased by MAR and more water can be extracted. Russo et al., 2015 combined GIS and modeling to identify suitable MAR sites and to assess the hydrologic impact and operating scenarios to reduce sea water intrusion in a coastal aquifer in California, USA. 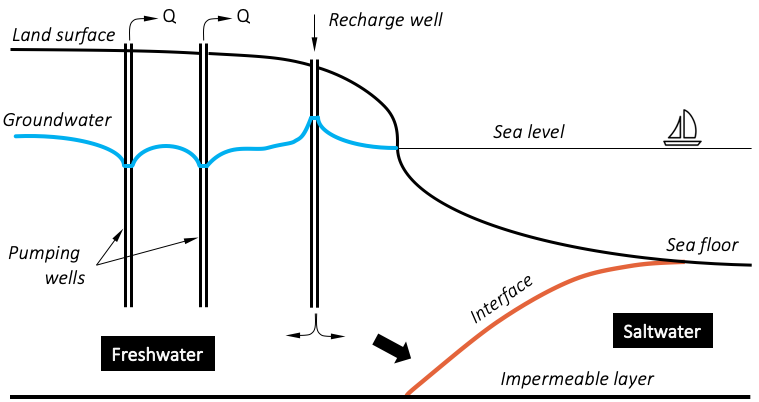 The INOWAS DSS can help to evaluate the present situation and evaluate the possibility to implement MAR to stop the migration of seawater further inland. The following INOWAS tools can be used to assess the impact of MAR on the saltwater-freshwater interface as well as saltwater intrusion:

To select a suitable MAR method or a model set for the specific study area, the following tools can be used: