Assessment of the impact of implementation of managed aquifer recharge on the local and regional groundwater systems and its users is of vital importance. Though the effects of MAR are generally thought to be positive by raising groundwater levels and thus ensuring continuous water supply for nearby wells or springs, an exaggeration of situation can lead to superelevated groundwater levels that may cause waterlogging or overflowing wells. It further needs to be checked if ASR wells affect surrounding groundwater users during the recovery phase when the groundwater table might be significantly lowered. 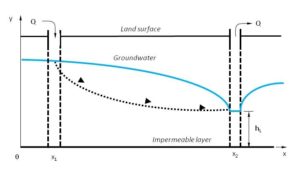 With the help of a regional groundwater model the impact of MAR as a new groundwater use on traditional groundwater users was assessed in Australia (Martin et al., 2012). Modeling the changing situation was of assistance to adjust water allocation plans for the area. In Florida the effects of ASR well fields on existing pumping wells was determined by modeling in order to optimize the well field design and operational parameters (Brown and Nevulis, 2006).

To select a suitable MAR method or a model set for the specific study area, the following tools can be used: