The simulation of solute transport can be integrated in the groundwater flow simulation (see T03.Numerical groundwater modelling and optimization) using MT3DMS or MT3DMS-USGS. The implementation is based on FloPy (Bakker et al, 2016).

The solute transport tool in combination with groundwater flow simulation can be used for the optimization of MAR systems. Specifically, it can be applied to analyze water quality, geochemical processes, recovery efficiency and residence time in MAR schemes (Ringleb et al., 2016).

The spread of infiltrated treated wastewater in the aquifer at Shafdan, Israel was simulated using the groundwater flow model MODFLOW and the solute transport code MT3DMS and to evaluate different operation scenarios (Abbo and Gev, 2008). Both models also helped  to improve the layout of groundwater monitoring wells and to determine the optimal hydraulic load, which is defined as the volume of water applied per time period, at a SAT site in China (Yin et al., 2006). The optimal infiltration pond operation and the transport of diazepem in an aquifer in Greece was analysed using MODFLOW and MT3DMS (Rahman, 2011). Wett, 2006 examined the clogging of a riverbank filtration system in Austria by simulating tracer tests. The hydraulic conductivity decreased by one order of magnitude through clogging resulting in a halving of infiltration rate during one year of operation. The behaviour of emerging organic contaminants during riverbank filtration was studied by Henzler, 2014.  Ray and Prommer, 2006 studied the chemical transport of ethylene dibromide to extraction wells during a hypothetical emergency spill in Illinois, USA. They further investigated the transport of the herbicide atrazine throughout a flooding event during riverbank filtration.

The utilization of well-established simulation codes such as MODFLOW, and MT3DMS is favourable due to the existing wide application field and comprehensive documentation (Ringleb et al., 2016).

The solute transport tool is mainly based on MT3DMS code, which is a modular three-dimensional transport model for multi-components, where MT3D stands for the Modular 3-Dimensional Transport model and MS means Multi-Species. It is capable to simulate advection, dispersion/diffusion and chemical reaction of contaminants in groundwater systems.

Advection means the transport of miscible contaminants at the same velocity as the groundwater. Dispersion in porous media describes the expansion of contaminants over a greater region than would be predicted solely from the groundwater velocity vectors. The chemical reaction is used for simulating general biological and geochemical reactions in the groundwater systems, which can be coped with equilibrium-controlled linear or non-linear sorption, nonequilibrium (rate-limited) sorption, and first-order reaction.

The transport of contaminants can be described with the following differential equation (Zheng and Wang, 1999):

The three-dimensional advection-dispersion-reaction equation in the MT3DMS code can be solved by the standard finite difference method; the particle-tracking-based Eulerian-Lagrangian methods; and the higher-order finite-volume TVD method.

Further packages, such as the Reaction (RCT) Package, will be integrated in the future.

The transport function is active when the ‘Enabled’ box is marked. Two versions of MT3D (MT3DMS and MT3D-USGS) can be selected to simulate solute transport on the platform.

A more specific explanation for the variables can be found in the question mark after each variable.

The following parameters are required for the Basic Transport Package: 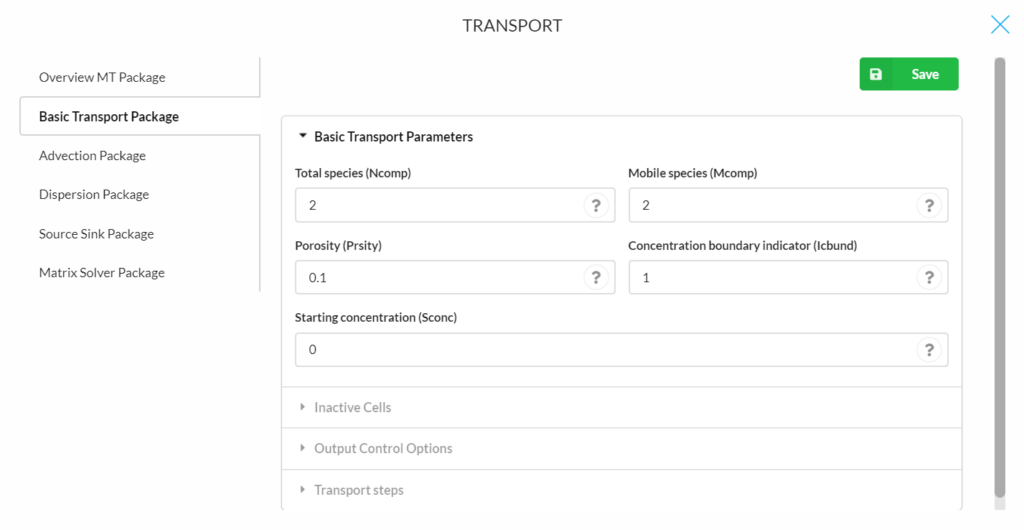 The platform only works for one species at the moment. Also, icbund and sconc can only be defined as a single value for the whole model domain.

In the advection package, the advection solution option (Mixelm) should be defined first. Four different options for Mixelm are available:

The various solution schemes are explained in the following in detail.

Mixelm = 0 is the standard finite-difference method with upstream or central-in-space weighting, depending on the value of NADVFD.  The following parameters are for determining advection and particle tracking :

Mixelm = 1 is the forward-tracking method of characteristics (MOC). The following parameters are for determining advection and particle tracking: 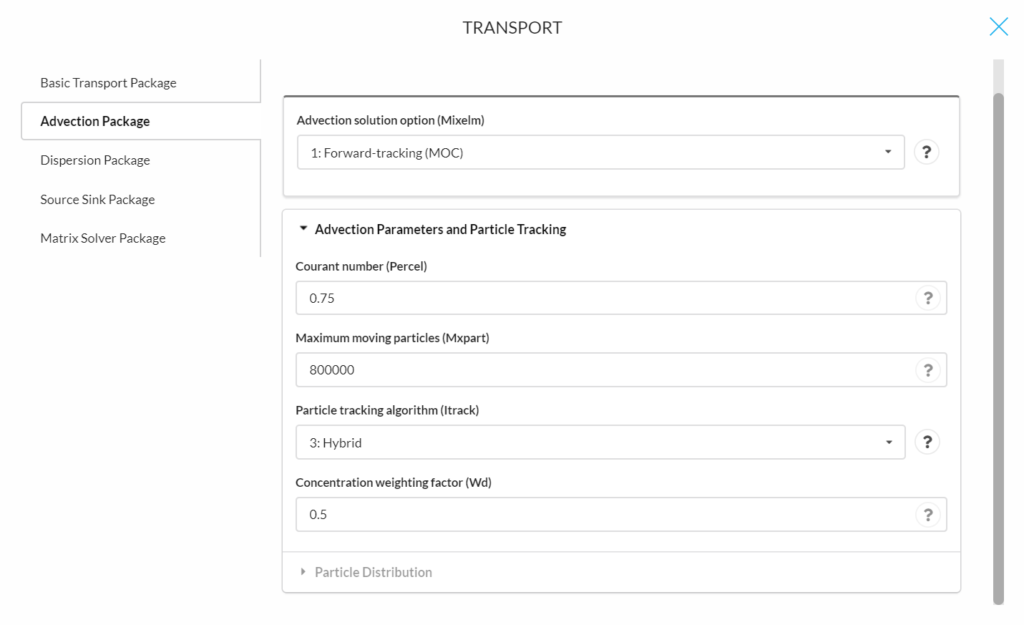 The following parameters are for determining particle distribution: 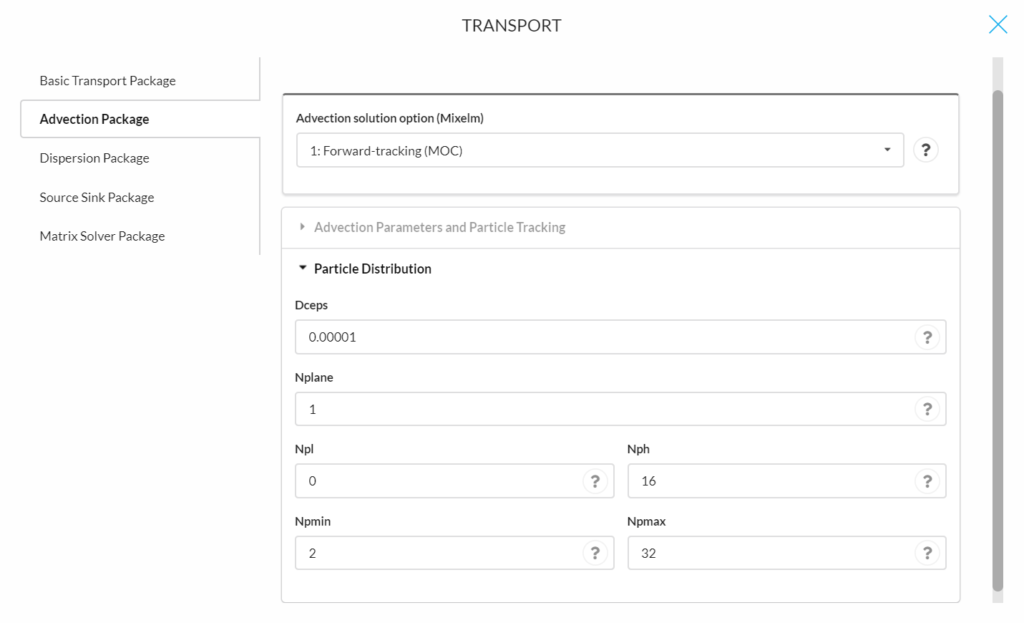 Mixelm = 2 is the backward-tracking modified method of characteristics (MMOC). The following parameters are for determining advection and particle tracking (for explanations of the parameters see other solution methods above): 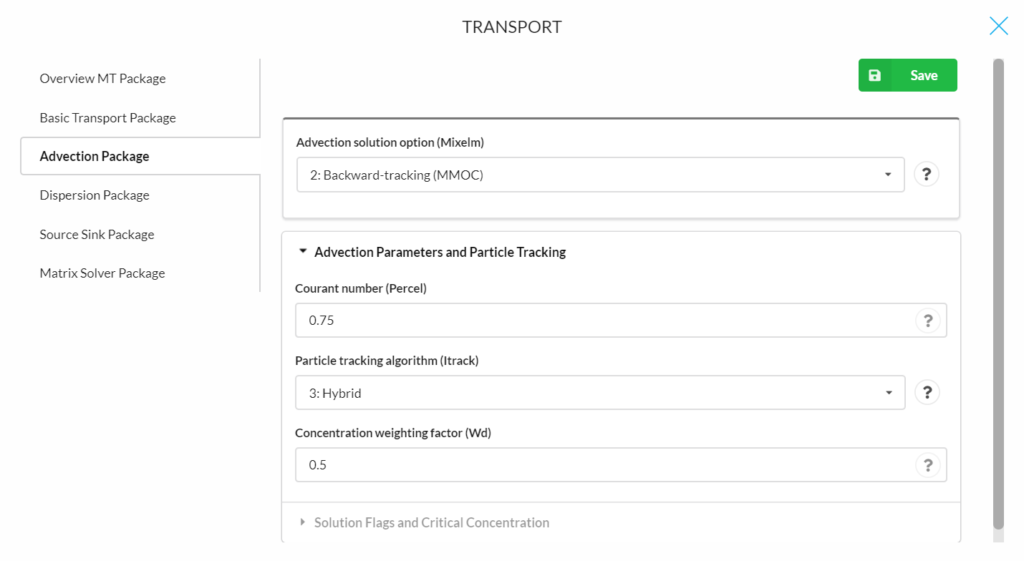 The following parameters are for solution flags and critical concentration:

Mixelm = 3 is the hybrid method of characteristics (HMOC) with MOC or MMOC automatically and dynamically selected. The following parameters are for determining advection and particle tracking (for explanations of the parameters see other solution methods above): 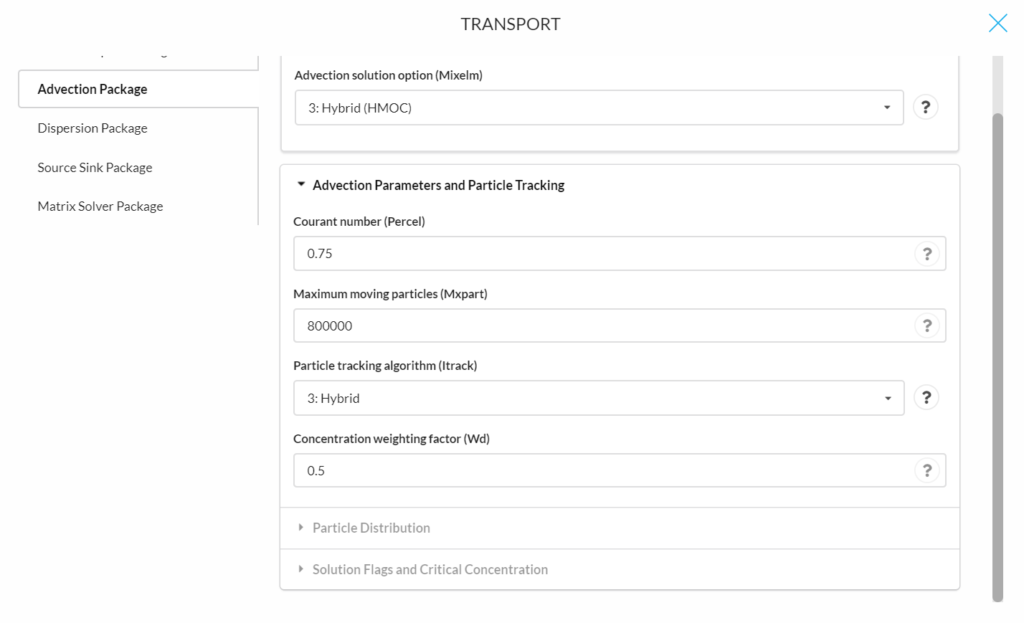 The following parameters are for determining particle distribution (for explanations of the parameters see other solution methods above): 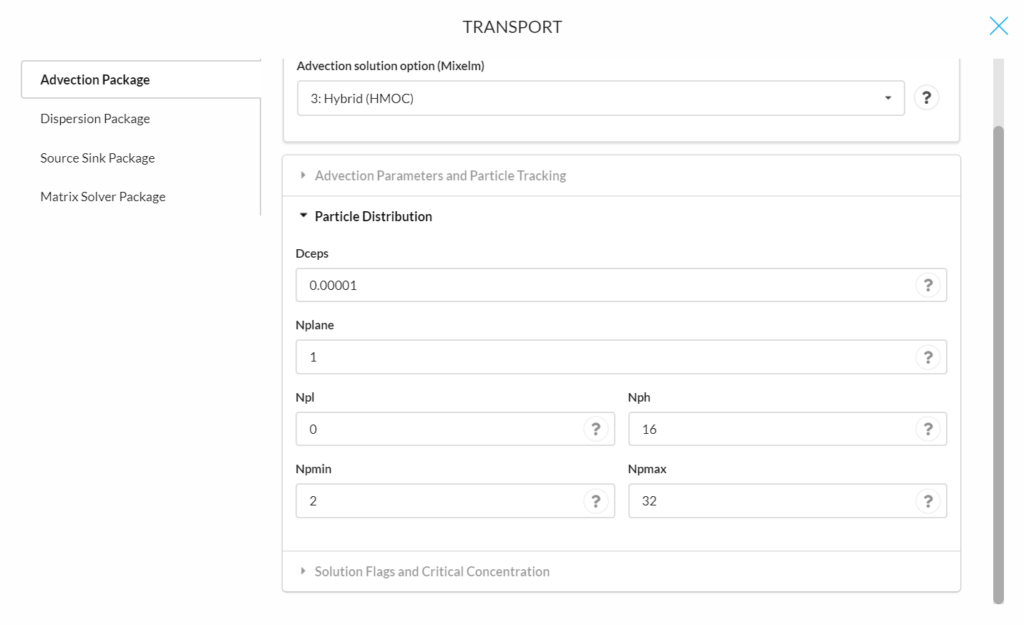 The following parameters are for solution flags and critical concentration (for explanations of the parameters see other solution methods above): 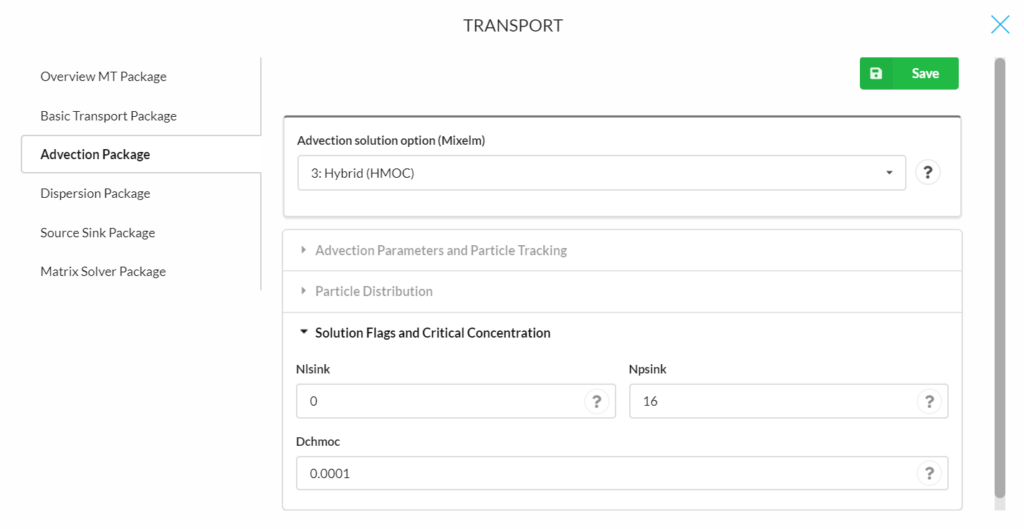 Mixelm = -1, the third-order TVD scheme (ULTIMATE). This scheme is applied for solving the advection term that is mass conservative and minimizes numerical dispersion and artificial oscillation. The following parameters are for determining advection and particle tracking:

The following parameters are required in the dispersion package:

The following steps are necessary to add sources and sinks to the simulation:

The solver on the platform is based on Generalized Conjugate Gradient (GCG) Package, which has following essential parameters: 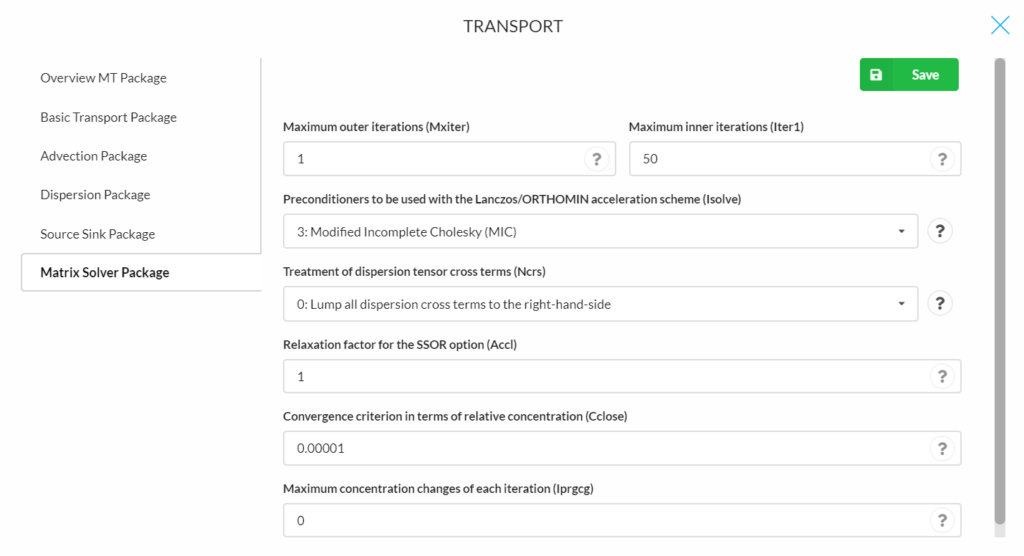 The model output such as  the mass balance and model list file can be viewed on the “run” section.

An overview of solute concentration in the selected layer and row can be displayed on the platform (same as the visualization of groundwater head). For that the substance, layer and stress periods can be selected. 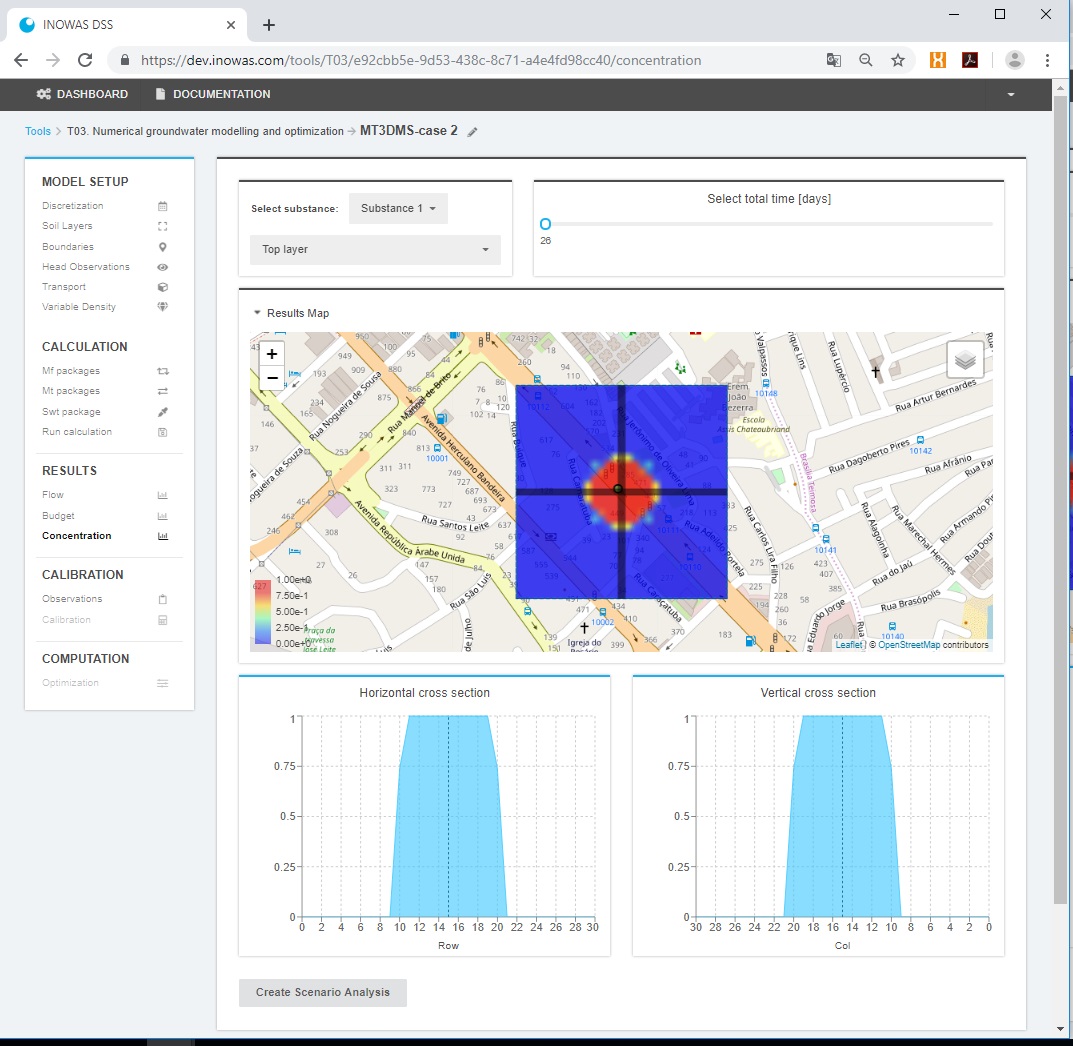 For more information on the individual packages and program functionalities, see the Flopy mt3dms online guide and MT3DMS Documentation and User’s Guide.